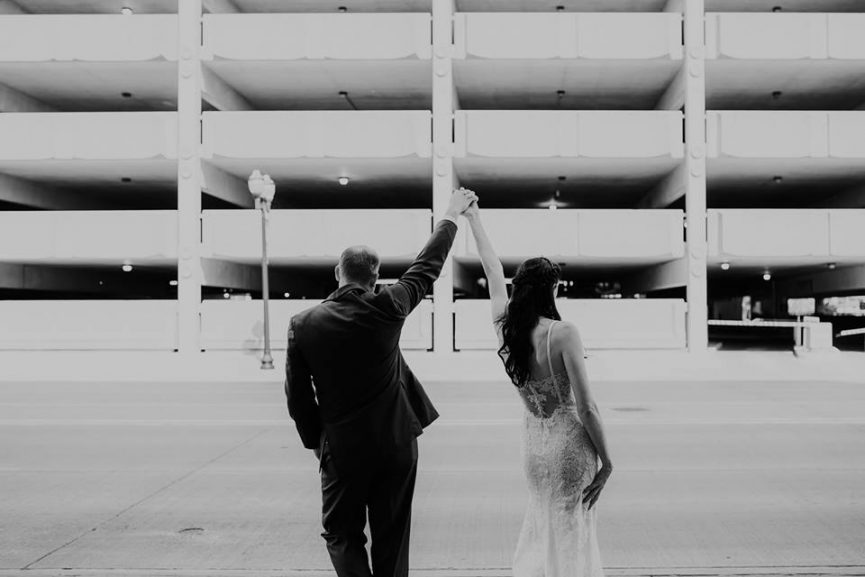 HORIZONS to see one of its own tying the knot!

Miranda & Tom I: The Love Story

Miranda Csutora has been an event coordinator with HORIZONS for over 12 years. Miranda works on a variety of events from expos, showers, corporate events, and more. Around the office, Miranda is known for her genuine, bright smiles. Her lighthearted presence blends effortlessly with her confident demeanor to create the wonderful co-worker and mother that she is. Miranda keeps her hands full between her passion towards her work and her amazing drive to raise her three daughters. Miranda’s girls range in age from four to nine.

“She’s just a perfect reflection of everything HORIZONS stands for and what we hope to accomplish.”

Tom Keenan, Miranda’s fiancé, manages and owns an insurance agency. He has been running his business successfully for the past 12 years. He runs his agency while balancing the parenting of his two boys, ages seven and sixteen.

Tom and Miranda met online and have been dating for the last three and a half years. For both Miranda and Tom, kids were something they didn’t hide from. Children are big parts of their lives and each wanted someone who found family equally as important. When they first began dating Miranda’s youngest was only one. The one thing Miranda wanted to convey was that she wasn’t going to play around with the time she had, as parents you can’t. Tom, being a parent himself, knew firsthand what she meant and wasn’t intimidated by the idea.

“It takes a special man to love a package deal.”

Miranda and Tom have their hands full from crazy jobs to a crazy house of kids. With plenty to juggle around Miranda added in that it takes a great deal of dedication and grasp of what’s worth your time in order to succeed.

How has it been planning the wedding knowing the other side of it being an event coordinator yourself?

Everything’s just natural, it’s easy when you know it’s being taken care of. HORIZONS is my family, it’s enjoyable when you can say it’s in your family’s hands. I know I can trust them; there’s no stress.

What has been the most stressful part thus far?

With planning under the wing of HORIZONS event coordinators, Miranda thought the closest thing to being stressful so far was finding the right wedding dress – Miranda found her perfect fit at Lola’s Boutique, a popular place for brides in the Saginaw area.

What did you envision for your wedding?

Everything has a sense of simplicity. The decor isn’t extravagant, Miranda wants the setting to speak for itself. The Temple Theatre is a beautiful venue – a perfect place for an intimate night where you get to enjoy the moment in a gorgeous environment.

Tom proposed back in November. He took her to Traverse City, with pretend reasoning to not raise suspicions. Miranda loves the Grand Traverse Hotel (which of course he knew) and surprised her with a room and a night away. He was surprisingly non-suspicious in saying he “forgot his wallet,” in reality, he was secretly setting up the room for later.

Tom took Miranda to get sushi, another thing on a list of things she loved. After dinner, they walked downtown a bit. Since it was a fairly chilly November night the walk didn’t last too long before they were back at the hotel.

Walking in, she saw all the classics in the room. There were flowers, bubbling champagne, and glowing candles. Tom gave a heartfelt speech, Miranda sweetly said she’ll keep as her secret little romantic memory.

Fast forward 7 months later, Miranda and Tom are busy at work and with kids while their wedding is nearly in view. 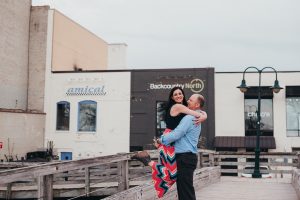 The Temple Theatre has a historic style rooted in elegance. Even with the glamour that comes with new modern venues, the classics never go out of style. 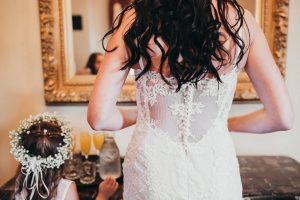 The bridal party mirrored England’s royal tradition which consist mostly of children with the maid of honor being the exception. For Miranda, her daughters had the delight of being bridesmaids and flower girl to their mother. Their mesmerized faces spoke a thousand words on their feelings of the day. Tom’s two sons stood as groomsman and ring-bearer. 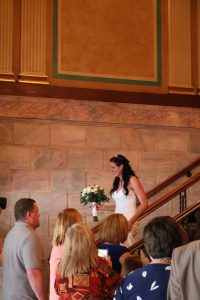 Each wedding you attend, you see such a mix of emotions from the bride and groom. Seeing Miranda was calming, she was more than ready for that day. As she walked down the stairs to her aisle where her husband-to-be was waiting, you could feel there wasn’t an ounce of nerves or doubt. Looking at Tom, there was so much joy on his face. His adoration for his bride was unparalleled that day.

The ceremony was sweet and meaningful to the couple.

The reverend officiating spoke dearly of marriage and how lives become entwined together when announcing their “I Do’s.” He showed with objects as simple and playful as playdoh how, once together, two cannot simple separate. The playdoh before as two different colors are meshed into one new color. The pieces were now interconnected so deeply if one were to try and pull them apart no piece will be completely its own. There will always be a piece, even the smallest part, rooted inside that one.

Miranda and Tom are a beautiful example of second chances and unwavering love. Their love for their children and for their family is unconditional.

As the reverend spoke his final words, smiles between the bride and groom grew as they foresaw what was next. He proclaimed them to be husband and wife.

Their first kiss was one of absolute bliss.

Proceeding the ceremony, guests said their congratulations and words of love before the couple slipped off for more photos. Guests then made their way toward the ballroom for hor d’oeuvres until the newlyweds could join the party.

The reception was held in the ballroom of the Temple Theatre which glowed with a warm and intimate atmosphere. The grand curved staircase and hanging chandeliers gave the room the old-world charm. Everything looked gracefully placed, the setting takes you back to the classic, romantic traditions and makes you imagine the days of ballgowns, dances and old-fashioned courting.

The bride and groom complimented the structures simplicity with silvers, golds, and a touch of something blue.

The tables were decorated with a cool steel blue tablecloth, gold sequined table runners, and held framed table numbers for ease of seating. Each setting was given menu cards trimmed in a movie screening feeling tucked inside skillfully folded napkins presented on a golden plate. Topping of the table décor were three tiers of floating candles in the center and soft blue flowers sitting on each side. 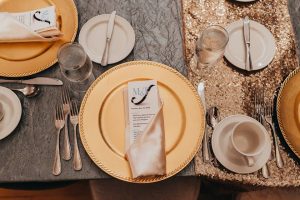 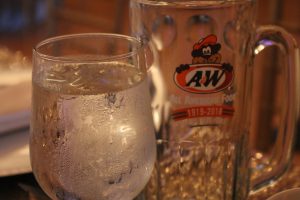 Miranda and Charlie, a loving co-worker at HORIZONS, for many years have enjoyed their own little traditions. Together they share a love of Coney hot dogs and take frequent trips to A&W to indulge in their favorites.

As a sweet way to share this tradition with Miranda’s newly pronounced family, Charlie had A&W mugs (even miniature ones for the younger ones) at each seat. While enjoying the reception, the Keenan family sipped on root beer in their fashionable new mugs.

From toasts to dinner and dancing the night continued without a hitch.

It’s truly a blessing to get the chance to watch love grow with a front row seat. Weddings are arguably one of the dearest, cherished memories two people share with each other. It’s one of the biggest beginnings of your lives. It’s the beginning of possibilities, more adventures, and more love you didn’t even know existed.

Witnessing Miranda and Tom’s was lovable. Seeing the affection they had for each other was so sweet. HORIZONS cannot wait to see all the joy being married will bring the new Mr. and Mrs. Tom & Miranda Keenan.

With many more amazing weddings to come HORIZONS, and myself especially, are so excited to share more stories of the happily ever afters we’ve helped come true.